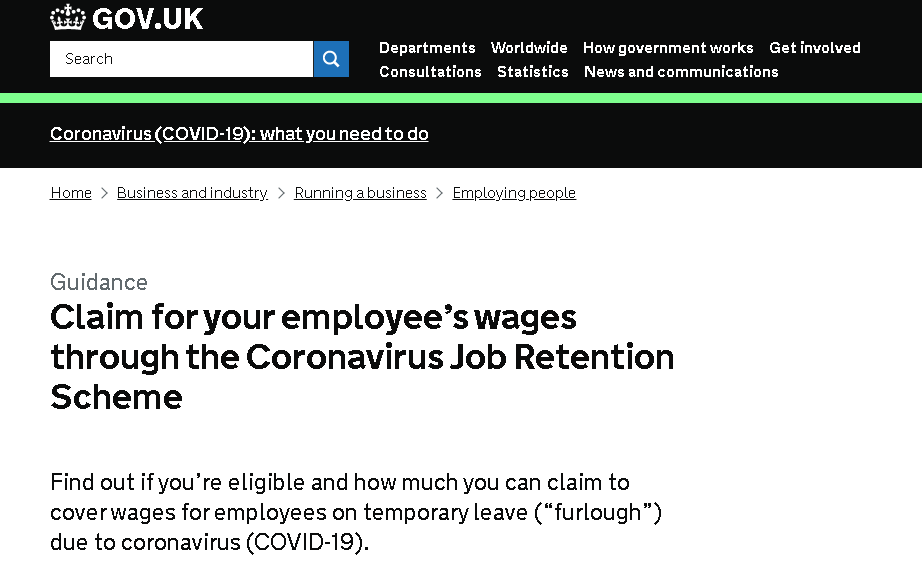 This article is designed to answer frequently asked questions about the Coronavirus Job Retention Scheme which was announced by the government on 20 March 2020 in response to the COVID-19 pandemic. Under the scheme, all UK employers, regardless of size or sector, can claim a grant from HMRC to cover 80% of the wages costs of employees who are not working but kept on the payroll (“furloughed”), of up to £2,500 a calendar month for each employee or PAYE worker, plus the associated auto-enrolment and employer national insurance contributions.

The scheme is intended to avoid redundancies and unpaid lay-offs which would otherwise have resulted from the economic impact of the COVID-19 pandemic.

Given that the reimbursement that employers can seek per employee is limited (to the lower of 80% of wage costs or £2,500 per calendar month, plus employer national insurance contributions and employer auto-enrolment pension contributions) we anticipate that many employers will seek to amend the contracts of those put on furlough leave to match the amount of money that can be obtained from the government.

The scheme is backdated to 1 March 2020, open for at least three months, and will be extended if necessary. HMRC are urgently working to set up the new system of reimbursement, and the government hopes the scheme to be up and running by the end of April 2020.

What employees are covered?

The scheme covers the following individuals, provided that they were on the employers’ PAYE payroll on 28 February 2020, regardless of their contract type:

Employees who were made redundant since 28 February 2020 can qualify if they are re-engaged by their former employer.

Employees on unpaid leave cannot be furloughed, unless that unpaid leave started after 28 February 2020. We assume that this is intended to prevent employees who are on unpaid leave for reasons unrelated to the pandemic from being transferred onto furlough leave and receiving a windfall.

Where an employee has more than one job, their employments are treated separately for the purposes of furlough leave, and the reimbursement cap applies to each employer individually.

Which employers are eligible for reimbursement?

The scheme is open to all UK employers who had created and shared a PAYE payroll scheme on 28 February 2020, and have a UK bank account. This includes businesses, charities, recruitment agencies with agency workers paid through PAYE, and public authorities.

What about employees who have already been given notice of redundancy or placed on unpaid leave before furlough leave was announced?

Employees made redundant since 28 February 2020 can be re-engaged and put on furlough leave. However, the scheme is unlikely to cover employees who were placed on unpaid leave on or before 28 February 2020.

Can an employer move employees who are already on reduced hours onto furlough leave?

Some employers have already placed employees temporarily onto reduced hours and pay due to the downturn in work as a result of the pandemic. The employer will not be able to seek reimbursement in respect of wages costs for employees who are still working but on reduced hours. The scheme only applies where employees are put on furlough leave (and doing no work at all).

Does the employee have to be at risk of redundancy to be covered by the scheme?

The scheme is intended to cover employers who would otherwise need to drastically cut their payroll as a result of the crisis, either through lay-off or redundancy. However, without further guidance, it is not possible at this stage to say with any certainty when the scheme will apply.

It seems unlikely that HMRC will undertake a forensic analysis of the circumstances of furlough leave. But it is almost certain that the government will retain the right to retrospectively audit all aspects of the scheme with scope to claw back fraudulent or erroneous claims.

Can you put employees on long-term sick leave on furlough leave?

It seems likely that employees who are on sick leave or self-isolating should receive statutory sick pay (SSP), but can be furloughed once they have recovered or are no longer self-isolating.

How is furlough leave implemented?

What steps must employers take to put employees on furlough leave?

Best practice is for an employer to consult with its staff and seek consent to make temporary changes to the employment contract by agreement. It is a condition of eligibility for reimbursement that furlough leave is confirmed to the employee in writing.

Employers will need to:

Can an employer rotate furlough leave between its employees?

Employees must be furloughed for a minimum of three weeks. This is in keeping with the current requirements for as many people to avoid leaving their homes as much as possible.

However, since employers are likely to receive many requests or volunteers to be placed on furlough leave, it is likely to assist employee relations for employers to be able to move employees on and off furlough leave, subject to that minimum three-week period, so that no employee feels that they have been unfairly denied the opportunity to take furlough leave.

Can an employee request their employer puts them onto furlough leave?

Are employers obliged to top up the remaining 20% of salary?

Employers can continue paying full pay during furlough leave, but they are not obliged to do so. If they do top up, they can only claim back employer national insurance contributions and minimum auto-enrolment payments up to the cap.

Employers should note though that failing to pay 20% of an employee’s salary will amount to breach of contract and unlawful deduction of wages unless the employee gives their consent. It is expected that the majority of employees will consent since furlough leave is a better alternative than unpaid leave, lay-off or redundancy.

Will employees continue to accrue holiday during furlough leave?

Furlough leave is an entirely new concept to employment law in the UK. However, it seems likely that holiday will continue to accrue during furlough.

The government has passed emergency legislation relaxing the restriction on carrying over the four weeks’ holiday with immediate effect. The new legislation permits the carry-over of up to 4 weeks’ leave where it was not reasonably practicable to take it in the leave year “as a result of the effects of the coronavirus”.

What can the employer claim back?

What does the reimbursement cover?

Employers can claim up to the lower of 80% of usual monthly wage costs or £2,500 per employee, plus the associated employer national insurance contributions and minimum auto-enrolment employer pension contributions.

Fees, commission and bonuses should not be included in the calculation.

The 80% calculation is based on the employee’s gross salary at 28 February 2020.

What is the position if 80% of pay is less than national minimum wage based on normal working hours?

Employees on furlough leave do not need to be paid national minimum wage (NMW) with reference to their normal working hours. However, if they undertake any online training then they must be paid the NMW in respect of those training hours.

Are the self-employed covered?

Not by this scheme, but a separate scheme is being set up to provide the self-employed with similar rights.  However, there are some key differences:

Whilst there is a lot of information to take in, if you have any questions please do not hesitate to get in touch with me on 01604 609560 or email me here

What happens to accrued holiday entitlement when a worker reduces the hours they work, but not the days?

Workers are legally entitled to a minimum of 5.6 weeks' paid holiday per annum (28…

How should annual leave entitlement be calculated for a “casual” worker with irregular hours?

How should annual leave entitlement be calculated for a “casual” worker with irregular hours? The…