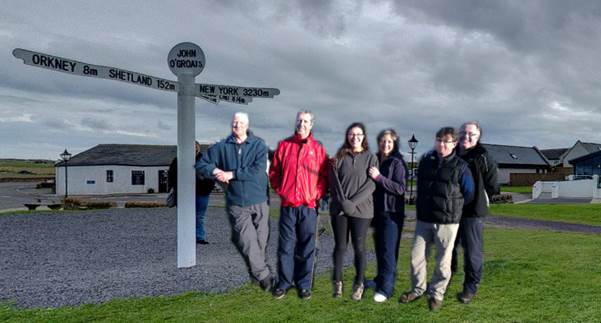 In an effort to shake of the winter/post-Christmas lethargy, a group of staff at DFA decided to walk, once a week normally on a Wednesday, at least 5km during the lunch break.  To give an added incentive the partners at DFA to agree to sponsor the walkers  ‘per kilometre’ walked and Sylvie, who is our Accounts Manager, and a volunteer at the Cynthia Spencer Day Hospice nominated the day hospice as the recipient  of the donation. In order to chart our progress we decided to attempt to collectively cover the distance between our office at 2 Waterside Way and John O’Groats, which according to ‘google maps’ is 947km.

We completed the challenge early in December and a donation was made to the day hospice.

11 different staff members took part in the challenge, some walked occasionally and others walked most weeks. There was only one week that we missed. Pictured above are the participants on the final walk, at a ‘virtual’ John O’Groats. they are (left to right), Philip Humphrys, John Keeble, Julie Axtell, Jo Harrison, Innes Macaulay and Richard Forskitt, behind the camera is Colin Mitton.

The team has now commenced its 2015 Challenge!